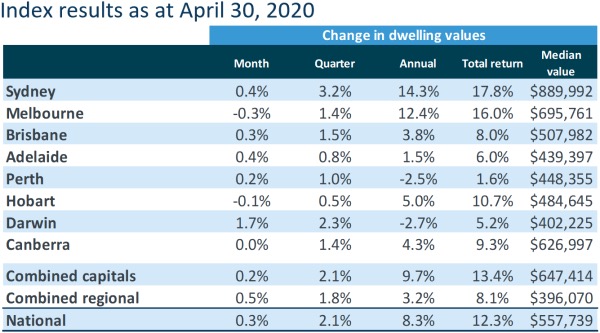 According to the CoreLogic Home Value Index results out on 1 May 2020, Australian housing values have not seen any evidence of a material decline in April, despite a sharp drop in market activity and a severe weakening in consumer sentiment.  Although most regions recorded a rise in home values through April, the national monthly pace of growth more than halved, dropping from 0.7% in March to 0.3%.  The April result was the smallest month on month movement since June last year, when the national index was down 0.2%. 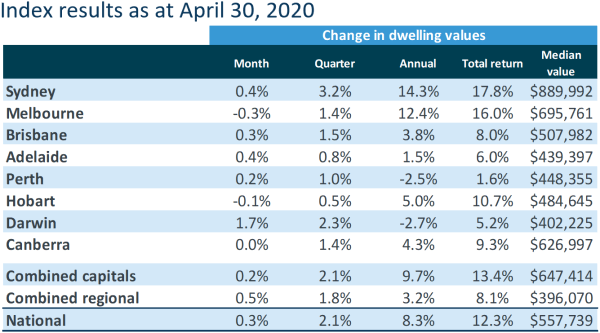 CoreLogic head of research Tim Lawless said, “Although housing values were generally slightly positive over the month, the trend has clearly weakened since mid-to-late March, when social distancing policies were implemented and consumer sentiment started to plummet.” The capital city markets generally showed a weaker performance relative to the regional markets, with the combined capital cities index up 0.2% in April compared with a 0.5% rise across the combined regional markets. The sharpest reversal in growth conditions can be seen in Melbourne, where values nudged into negative territory through April, down 0.3%. Sydney values remained positive, rising 0.4% over the month. To provide some context, the six months prior to March saw both cities averaging a monthly growth rate around 1.7%.
Source: Jade Harling: 1MAY2020, Corelogic